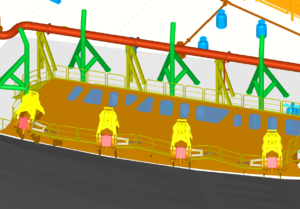 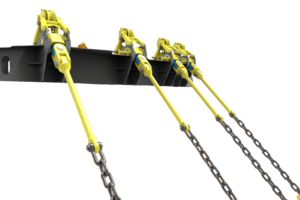 In early 2016 the FPSO Kwame Nkrumah operating in Tullow’s Jubilee field offshore Ghana suffered a failure of the turret bearing causing the vessel to be unable to weather vane. This event then created a situation where the vessel was on a non -optimum fixed heading leading to high loads on the mooring and risers.

MacGregor assisted Modec in providing the initial stern heading control hold back line system with supply of stern chain stoppers. This enabled the FPSO to be rotated onto the optimum heading.

In parallel with this Flintstone was designing and manufacturing the new bow mounted spread moored solution utilising the same in line tensioner design selected for Shell Vito. The major challenge however was the lack of any crane capacity on the FPSO which required a novel solution. A modification the Flintstone’s BTC pull through connector enabled the mooring lines to be connected without need for an onboard crane thus solving the problem.

The combination of the in-line tensioner and the BTC means that the tensioning process is carried out well away from the FPSO which remains producing giving a safe and fast method of hook up and tensioning.

Who Landed the Project

Who Delivered the Project 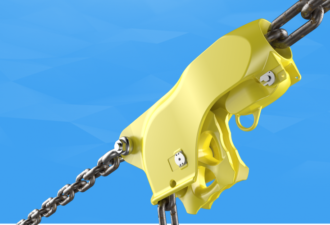 The benefits of in line tensioning is to take the tensioning operation away from the hull which provides an increased level of safety, keeping marine operations at a distance. It also reduces weight by eliminating need for chain jacks and fairleads at the hull.
Read More 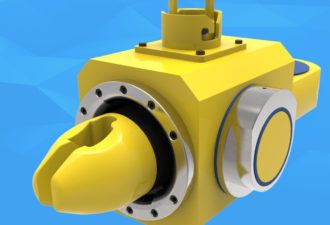 The BTC is an ROV operable mooring connector. It uses a sheave to allow the male to be pulled into the female. The ROV then inserts and locks a pin. This product means the mooring line can be connected and disconnected with ease.
Read More